Following up from my earlier post about the TFL Data APIs I don't think I was being fair towards the TFL dev team.

The API that is currently provided, called TrackerNet, was made available in August 2011 and is showing its age. The API is still quite horrendous by modern (and 2011) standards but granted is the first step publishing the vast network of disparate data-sources in use used within the TFL after its merger in 2000.

Little did I know that there is indeed an impressive brand new API (api.beta.tfl.gov.uk) powering the newly redesigned tfl.gov.uk website that was launched in late March 2014. This I discovered by accident when investigating the seeming information difference between station disruptions in the TrackerNet API and what was displayed on the TFL website.

Below are images showing the difference in information provided for the same tube station "Paddington" between the old TrackerNet API and what is shown on the TFL website itself. 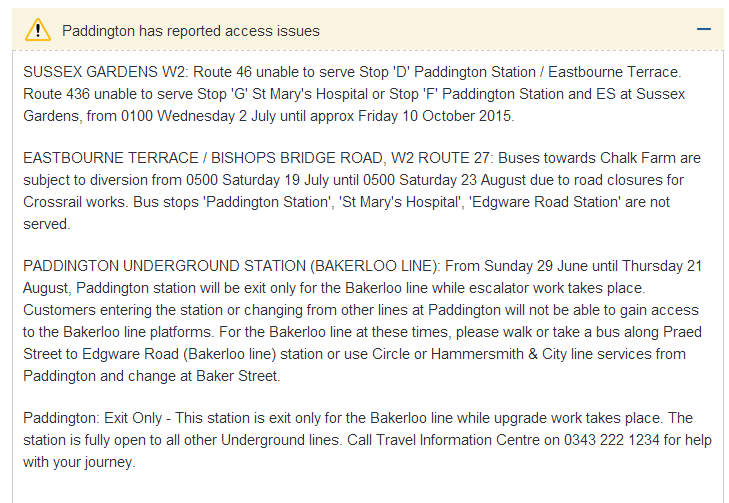 api.beta.tfl.gov.uk offers information about it seems every aspect of the TFL network and facilities. The developers seem to have taken the quite ambitious approach to developing the new TFL site as simply one presentation layer on top of this vast and rather well performing API.

The guidelines ask that developers that want to leverage the API sign up for a key and an app-id that should be submitted with every query. But all API calls seem to work just fine without supplying these values.

One minor gripe that I have with the API is that it is perhaps overly verbose with average data result sizes close to 1MB in size (uncompressed) . Comparing the size of the boris bikes between the APIs:

But this is a small price to pay today for a much richer and consolidated API experience.

Unfortunately the data published by the old API is not compatible with the new one and most notibly is the station and tube line names that are different. Luckily developers such as Matt Hinchliffe have already gathered some really useful support data to make the data and its use easier.

Now I guess I should update my bike and bus websites to leverage this new found API gold :)